Free trade agreements and the Isle of Man 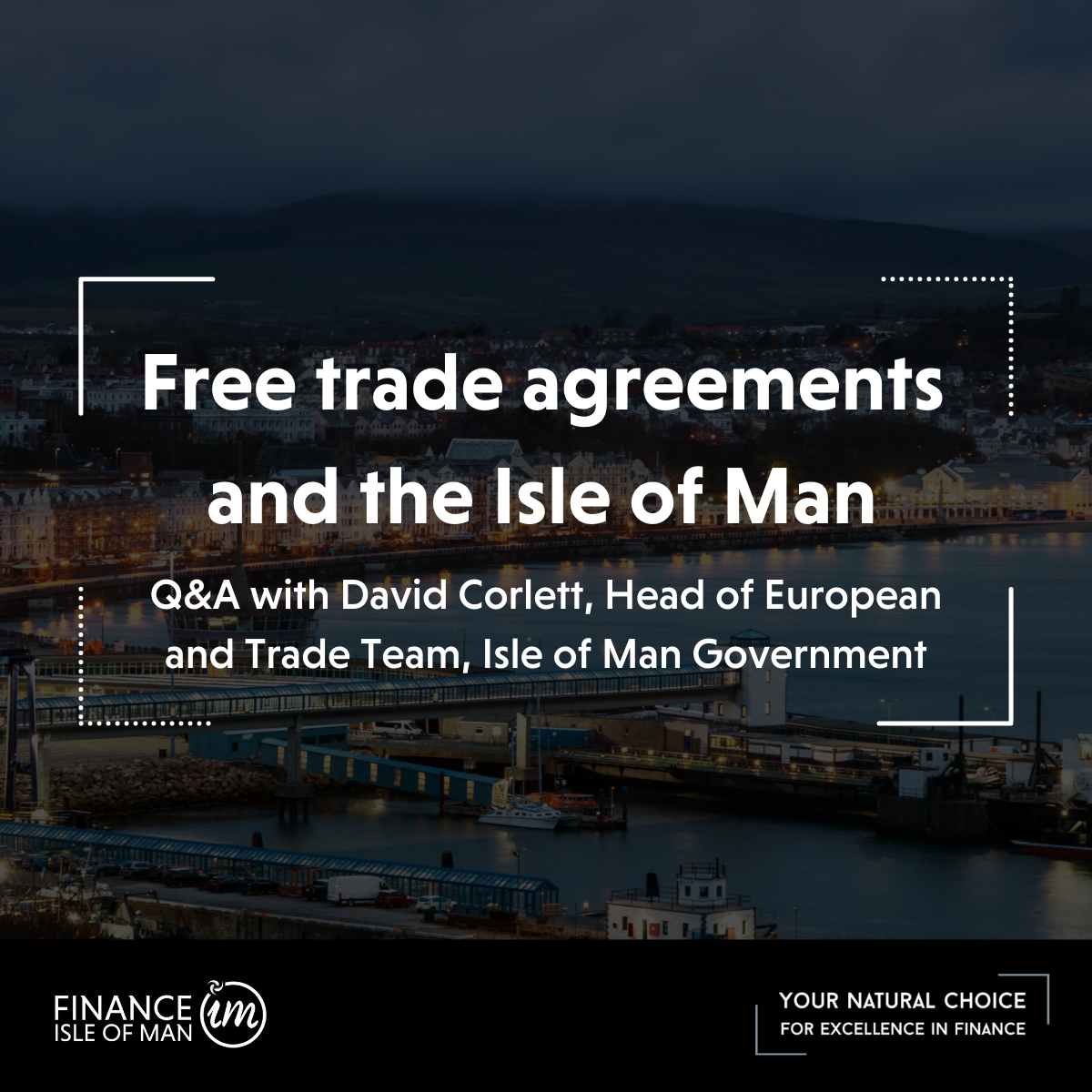 Following Brexit the UK has been free to negotiate trade agreements with other jurisdictions.  The Isle of Man could potentially benefit from this as we can be included within the scope of future agreements.  We have caught up with David Corlett, Head of the European and Trade Team at the Cabinet Office, to discuss how Free Trade Agreements are negotiated, how they work, and how they apply to the Isle of Man.

What is a Free trade Agreement (FTA)?

It is an international treaty, signed by two or more countries, agreeing to create a Free Trade Area. The idea is to make trade between those countries easier and increase the overall volume of trade. FTAs include provisions relating to trade in goods and trade in services, alongside other provisions which often include agreement of common standards or principles, removing what are known as ‘non-tariff barriers’ which could be trade distorting.

What does free trade in goods mean?

Usually this will mean the removal of tariffs (import duties) on goods being exported from one party to another. The goods element of an FTA also attempt to remove any discriminatory restrictions in terms of Sanitary & Phyto-Sanitary Measures (animal and plant health rules), and make customs procedures simpler.

What about trade in services, there aren’t tariffs on those?

No, usually the provisions on services look to eliminate any local rules or regulatory requirements which discriminate against services providers from third countries. They can include measures on investment, cross-border trade in services, telecoms, digital services or the temporary entry of cross-border workers. Some FTAs include provisions on the mutual recognition of qualifications.

What ‘other’ provisions might you see in an FTA?

In order to ensure that companies based in the other party are not going to undercut the home market by means of unfair competition, an FTA will often contain provisions which ensure a so-called ‘level playing field’ in terms of labour/employment law, environmental provisions, state aid/support, competition law. There may also be provisions which encourage co-operation on diverse issues such as international development, climate change or women’s economic empowerment.

What FTAs are the UK negotiating at present?

When it left the EU the UK rolled over some 60 EU trade agreements with other countries. It has, since leaving the EU, negotiated new agreements with Australia and New Zealand. It has also amended its existing agreements with Japan, EEA/EFTA and Singapore. The UK is planning to open negotiations with Canada, Mexico, the CPTPP (11 countries around the pacific rim) India and the GCC (the Gulf Co-Operation Council).

How do UK FTA’s apply to the Isle of Man?

How do FTAs come to cover the Island?

Before the UK left the EU, trade policy was an EU competence, and it negotiated Free Trade Agreements on behalf of all of its members, including the UK. Those agreements applied to the Island to the extent that it was covered by the EU treaties (as set out in Protocol 3 to the UK’s Treaty of Accession to the EU, which covered customs rules and matters relating to trade in agricultural products).

The UK’s continuity (rolled forward) agreements where preserved in their entirety, and so they still only applied to the Isle of Man for the limited scope of Protocol 3.

However, new agreements negotiated by the UK (e.g. Australia and New Zealand) – and those existing EU agreements which were opened up and re-negotiated (such as Japan, EEA/EFTA and Singapore) can be extended to cover the Island beyond simply goods provisions.

So how does this work?

It’s quite tricky actually, as the negotiations usually go right up to the wire, and the draft texts and negotiating lines cannot be shared outside the very small negotiating teams. This means that, generally, an FTA will apply to the Island for trade in goods from Day 1 – this is relatively straightforward because the Isle of Man is in customs union with the UK and so has to keep its tariffs aligned with the UK. In addition, in order to maintain free and friction free trade in animal and plant products (all foodstuffs) the Island has committed to maintain alignment on SPS rules with the UK. In effect, therefore, if the UK can meet the requirements on goods, then so can the Island.

On services, it is not so straightforward, and so the UK will typically include a territorial extension provision which will mean that it can declare that certain provisions of the agreement, relating to services, can be brought into force for the Island at a later stage

How does that happen? Is that a good thing?

Normally it is for the Isle of Man to prove to the UK in the first instance that it can meet the obligations set out in the agreement. The UK will then discuss the extension with the other party. As this has never been done before, it is not possible to say exactly how it would be effected.

Yes it is a good thing. The Isle of Man has a largely service-based economy, and this is the first time it has been possible for the service related elements on an FTA be extended to cover the Island. It puts Isle of Man businesses on an equal footing with UK businesses, in terms of trade with that country, and it also give Island businesses something to point to, should they encounter any barriers to trade with an FTA partner.