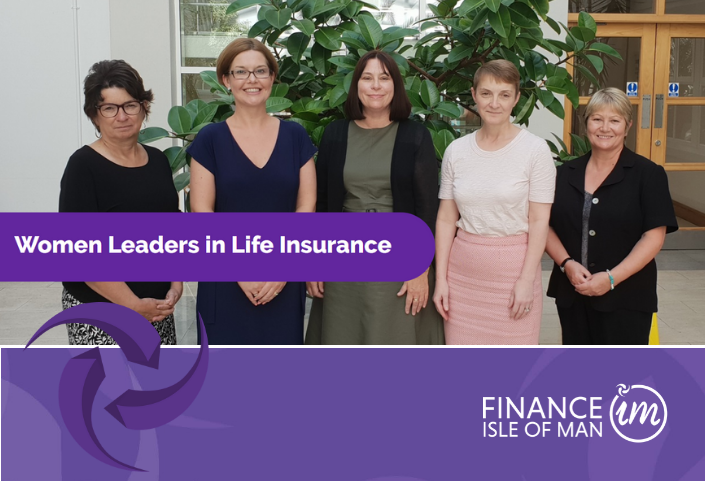 According to a survey by the Financial Times in April 2017 women account for more than half of the overall workforce, across 50 of the largest finance related organisations in the world. This would suggest that globally, women are doing well across the finance sector in terms of overall numbers, but more alarmingly the same report said only 25% of the ‘senior roles’ across the same sector were filled by women.

Looking at these figures it would be easy to simply say that if this is a global snap-shot then surely this must hold true for the Isle of Man finance sector and therefore the Island’s life insurance sector. But that’s all it is a ‘snap-shot’ a snippet of a global cross-section, the brush strokes of which are too broad for the Isle of Man, where we like to do things a little differently. The Isle of Man was the first national Parliament to give women the vote in a general election in 1881, giving themselves a head start on gender equality, something the Island is very proud of.

Are women more or less likely to obtain a role in the Isle of Man finance or insurance sectors and, importantly, are we likely to see the same huge split when we compare men and women at senior level?

The last census carried out on the Isle of Man in 2016, showed women across the finance sector were 55% of the total workforce. Broadly speaking, this is in line with the rest of the world, if compared to the 2017 Financial Times report.  No surprises here.

Where things begin to become more interesting is when we drill down deeper into the figures to see what happens when we look at how much of the 55% of roles, occupied by women, are at senior level.

Of all the women employed in finance roles (which was 55% of the total workforce in finance), approximately 45% were employed in a senior role in 2016. It’s fair to say, a substantial portion of the female workforce, in finance, are occupying senior roles.

The big question is, what percentage of women are in senior roles compared to men? Do they follow the same trend as the Financial Times report suggests is happening globally, that a mere 25% of senior level roles in finance were inhabited by women?

In the Isle of Man finance sector in 2016 women occupied 45% of the senior roles, much higher than the global average of 25%.

But what does this mean to women in the life insurance sector? Is this a surprise? Is this enough or can this be improved and if so how?

Who better to answer these questions than women leaders in life insurance themselves? In a recent roundtable discussion between  Gillian Marples Head of IntegraLife International, Cathy Dawson, Chief Compliance Officer at RL360, Karen Coran , Head of Human Resource at Hansard Global plc, Karen Badgerow, CEO of the Isle of Man Financial Services Authority and Lillian Boyle, Chair of the Isle of Man Financial Services Authority. They came together to discuss these figures, their personal and professional experience and whether this has changed or shaped their views.

‘I am not overly surprised by the stats on the Isle of Man, when I began working at CMI when it was established in the Isle of Man in 1987 and the team setting up the business was predominantly women. The Isle of Man based Managing Director was a woman. This was a significant change compared to the small family owned business where I started my first job and still had to make the coffee despite men being employed into junior roles after me. The informality of addressing the CEO of CMI by his first name was a culture shock.’

Gillian, who also represents the life industry on the newly created Finance agency board added:

‘It is encouraging that the number of women occupying senior roles in the Isle of Man insurance sector is higher than the global average. The industry can only benefit from the recognised positive impact to be gained from developing a diverse work force which facilitates the consideration of issues from a number of different perspectives.

‘There are a wide range of career paths available within life companies on the Isle of Man and women hold senior roles across a wide range of disciplines, not just in those more traditionally associated with women. IT, Finance, Investment and Marketing departments are headed by women as well as HR, Compliance and Operations.’

‘Women are also active within the industry Trade Association, the Manx Insurance Association (MIA). I am the Chair of the Association and two of the four active Sub-Committees are chaired by Cathy  and Michelle Lees.’

‘I agree with Gill there is great value in giving encouragement at the right time to become involved in wider business and professional bodies. Over a number of years the MIA has demonstrated this both in the number of women who have been Chair and headed up its specialist Groups. Getting experience outside of your own company gives a lot of opportunity for personal development.’

The International Insurance Sector on the Isle of Man is still a relatively young industry (coming up for 40 years) compared to others such as manufacturing, construction etc. It’s possible the industry has been shaped without any continuing prejudice that may possibly exist in other industries. Over the course of nearly 40 years there have been a number of female CEOs and directors of Isle of Man Insurance companies, thereby indicating that the glass ceiling is not an issue for women in the International insurance sector on the Island.

‘We are very fortunate to have strong female representation in many of our senior roles at the Authority and now most recently at the Board as a result of a recent recruitment exercise. The FSA board for example is now gender neutral.  I think that diversity of any kind engenders a different kind of conversation and decision making process as it allows us to draw upon a more broad range of both professional and life experience.

Do we think female employees now looking for more from their employers?’

‘I believe there has been a massive shift over the last 5 years. Employees in today’s society, regardless of gender, are looking for more from their employers. Organisations are now competing on culture as much as salary which makes attitudes towards diversity, flexibility, wellbeing and values ever more important. Word of mouth on the Island is incredibly powerful.

‘Many employers on the Island, including Hansard, are reaping the benefits of flexible working. Whether that be working from home on occasion, flexible working hours, part time working, late lunches/school picks ups they are all supporting our employees both male and female to achieve a work/life balance. It is a balancing act and often requires equal amounts of give and take but when you get the balance right it is priceless. In my experience that requires trust and that trust is typically build up over time. In my opinion organisations need to better promote the flexibility that they can offer their employees from day 1 and stand behind that way of working post recruitment.

Are other companies following this trend of focusing more heavily on wellbeing and are females getting the opportunities they deserve?’

‘I feel I have been afforded every opportunity to grow and develop without encountering any barriers to progression. Our recently appointed Group Risk Director is a woman and she is sponsoring leadership development programmes for individuals despite gender, who are capable, have potential and show the right attitude and behaviours.’

‘I have never felt restrained by gender during my career and have been presented with many exciting opportunities including chairing the MIA and joining the Finance Agency Board.’

‘The Isle of Man has, due to its size, had to be innovative and has actively set out to attract new industries creating a culture where people are given the freedom to flourish.

‘Talent recognition and succession planning is important at all levels for men and women. There is no reason to suggest that women work any better than men and vice versa but diversity throughout a company has a beneficial impact and gender balanced leadership teams make better business decisions.’

‘By providing an environment to learn and develop through professional qualifications and industry training the Life Businesses, like other areas in the wider Isle of Man Finance Sector, have created a culture of inclusion encouraging and motivating women to study and progress their careers. This is something I have seen first-hand both in my time as a Life Company MD and as Chair of the IOM Branches of the Chartered Insurance Institute and the Chartered Investment & Securities Institute.’

‘Changes in education have helped to shape the way women develop. The conscious and unconscious bias is already being broken down from an early age. No longer do girls do needlework and cookery while boys do woodwork and metal work as was the case when I was at school. It is likely, given the small travelling distances on the IOM and the family support networks that women find it easier to return to work having had children.

‘Certain areas are still dominated by women e.g. Risk, Compliance and HR, and other areas are dominated by men e.g. Sales and IT. In time it is hoped those roles will have gender balance.’

‘I think the newer generation is definitely looking for different things from their employer to reflect changing values around the balance between work and home. I have seen a number of changes in the last 35 years of my working life and most notable has been the introduction of more flexible work arrangements and the smart use of technology to support different ways of working. Combined they ultimately provide more support to working parents and in particular women who statistically still carry a lot of “home-based responsibility”.‘

‘The stats in the Isle of Man are positive, however, in my experience there remains a shortage of senior female candidates, in the last 5 years we (Hansard) have recruited for a number of senior roles and few candidates, if any, in some scenarios, were female. ‘

The roundtable concluded with an agreement that the Isle of Man is making progress but shouldn’t rest on its laurels, there is still work needed to encourage more role models who can actively support and mentor in the workplace to ensure we achieve the appropriate diversity across all levels of our business. However the standout point was, ‘opportunity exists for women on the Island who are interested in working in a senior role.’