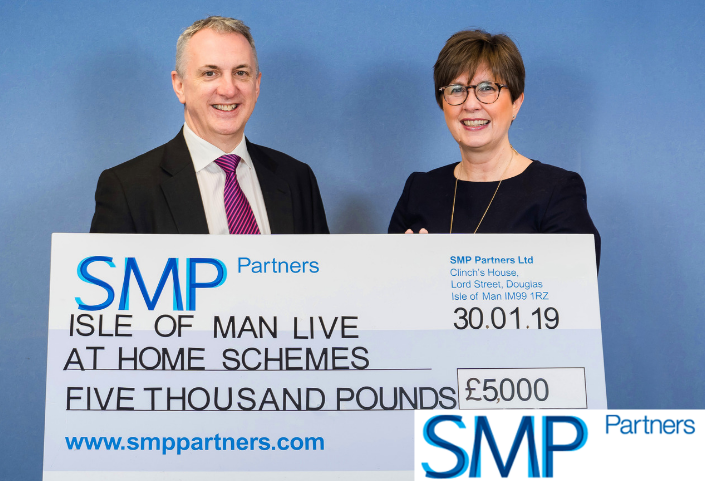 An Island charity that helps people to live independently has been boosted to the tune of £5,000.

It takes the total donated by leading international corporate service provider SMP Partners during 2018 to £10,000.

Isle of Man Live At Home, the firm’s Charity of the Year, received the proceeds from a variety of events organised by staff including casual clothes days, bake sales, parish walk sponsorship and bucket collections from theatre shows.

Formed in 1998, Live At Home campaigns to end loneliness within the island’s population of older people.

Around 600 members and a network of 312 volunteers are involved in the communities of Douglas, the North, West and East of the Island as well as the Northern Men in Sheds initiative based in Ramsey.

They have access to a range of services, including one-to-one befriending, regular social groups, lunch clubs, film clubs, and shopping clubs, all with transport provided.

After receiving the final donation of £5,000, Chief Executive Jackie Bridson said: ‘To receive the support of a company like SMP Partners is truly humbling.

‘Our services have developed and expanded gradually in recent years and we rely almost entirely on fundraising and voluntary donations so to be backed by such an established Island firm which values the work we do is greatly appreciated.

‘The substantial donations make a very real difference to our work as we raise awareness of the impact of loneliness and isolation in later life and identify initiatives to address these issues.’

SMP Partners Managing Director Mark Denton added: ‘We are proud to be a part of the Isle of Man community and believe that supporting local causes is so important, which is why we dedicate time and resources each year to make sure we are doing what we can to make a difference.

‘A big thank you to all the team at SMP Partners who contributed to the charity during 2018. I am so pleased we managed to raise such an amount for an organisation which works hard to improve the quality of life for older people on the Island.’