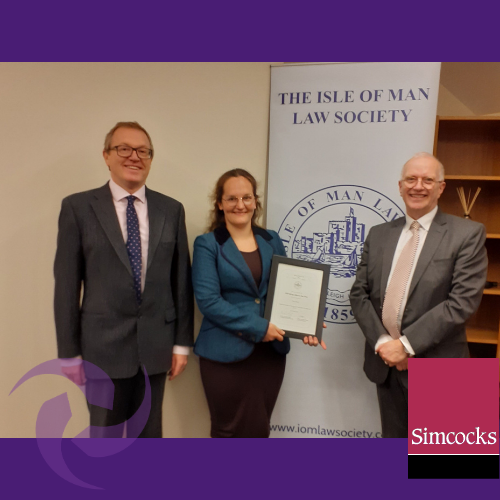 Emily Johnson, Advocate at Simcocks, has been awarded the George Johnson Law Prize for the second year in a row.

The 2020 prize, which was established in 1943 in memory of George Sayle Johnson, has been awarded jointly to Emily and advocate Adam Killip.  Her winning essay was on the subject of technology in the courtroom, entitled, “Could more be done to extend the use of technology in the Manx civil courts?”

The prize was presented to Emily by Deemster Corlett at the IOM Law Society in the presence of Tim Swift, President of the Law Society.

Last year Emily won the prize with her essay “Does the system of legal aid in the Isle of Man require reform and if so in which respects?”  She is currently on maternity leave, having had her first child, Freddie, in September with husband Matthew.