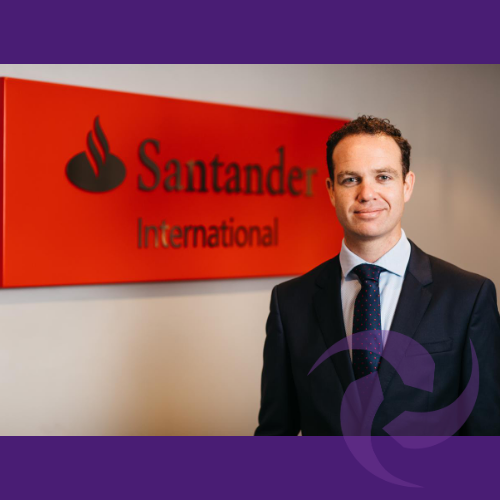 Santander International’s new Managing Director for the Isle of Man Branch has started his role after a three-month delay due to the Covid-19 lockdown.

James Geldart was due to take up his position in the Isle of Man in early April, however, pandemic restrictions meant he could not leave Jersey until July. Upon his arrival on Manx soil earlier this month, James completed a two-week isolation period, where he was working from home. Earlier this week James joined his new team in Douglas.

James is no stranger to the Isle of Man, having grown up in the south of the Island and as a former pupil of Castle Rushen High School.
He has worked with Santander International since 2016 as Head of Retail and Private Banking for Jersey and the Isle of Man. During this time, James developed the bank’s HNW and mass affluent proposition for both island residents and international customers.

Having worked in banking since 2006, notably within wealth management and the expatriate market in UK, Dubai and Jersey, he has a wealth of experience behind him.

James said: “I’m delighted to be able to move back home to the Isle of Man and this promotion marks an exciting time for me both personally and professionally.

“Santander International has a strong and growing presence in the Island and as Managing Director of the Isle of Man Branch I hope to further the development of the bank, exceeding the expectations of our clients and continuing to offer a brilliant working environment for our staff.”

A graduate with a BA Honours degree in Management and a Charterholder with the Chartered Institute of Securities and Investments, James began his career in banking as a Financial Planning Manager with HSBC UK, working with the bank in various roles and jurisdictions. Outside of work, James is a keen cyclist and triathlete, taking part in local and international events.

James Pountney, Chief Executive Officer, Santander International, said: “Growing and developing talent is a big part of our success story at Santander International and we are delighted to see James take this next step in his career. James has become an integral part of our leadership team and his extensive Jersey and Isle of Man connections will help us maintain a strong working relationship between teams in these jurisdictions.”

John Pearson, the previous Managing Director of the Isle of Man Branch, will remain on the Executive Committee and take up a new role developing new markets for Santander International.