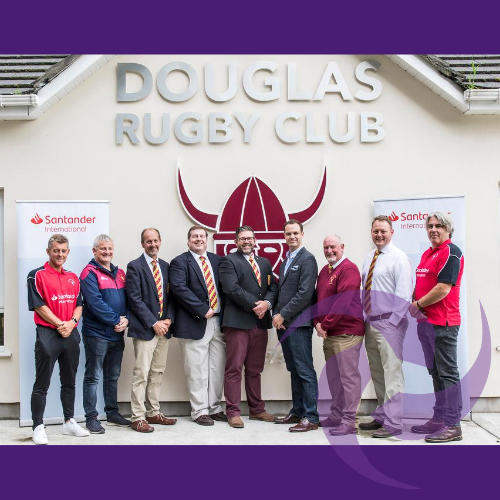 Santander International has become the lead sponsor of Douglas Rugby Club following the signing of a five-year deal.

The agreement signifies the beginning of a strong, long-term alliance between the Isle of Man branch of Santander International and one of the Island’s leading rugby clubs, and gives the club a solid foundation to continue with its long-term development. The sponsorship will run from 2020 until the end of the 2025 season.

James Geldart, Managing Director of the Isle of Man branch of Santander International, said: “We are delighted to become Douglas Rugby Club’s main sponsor and we’re looking forward to helping the club build on its success. The club has an impressive track record across all of its teams and they help to develop talented young players within the Island’s rugby community, so it is exciting to be on board. We wish them luck for the season ahead and look forward to a successful partnership in the coming seasons!”

Carl Murray, Head Coach at Douglas Rugby Club, added: “We’re really excited to welcome Santander International into our tight-knit rugby fraternity. To have the support of such an established local business is an absolute pleasure and we’re looking forward to working closely with James and the team and moving forward as a strong alliance.”

Founded in 1873, Douglas Rugby Club is the Island’s oldest and most established Club. One of the original teams involved in piloting the English League system during its inception, it has gone on to be the most successful side in Manx rugby history. Playing at the highest level for the longest time of any local club, the Douglas First XV won promotion to North 1 West rugby union league in 2018, and after three competitive seasons has ambitions for higher honours and National league Rugby.

Its Second XV has also made history with a clean sweep of wins in local competitions including the Manx Cup, marking the first time this prestigious tournament has ever been won by a Second XV.

Past notable Club players include 1888 British Lion cap Alf Penketh, and England cap and 1962 Lions tour manager Brian Vaughan, who was instrumental in the building of the Port-e-Chee clubhouse in his capacity as Club President.

Douglas Rugby Club currently has more than 80 senior rugby players, junior teams from U7-U14 and is building an U15s and U16s team with other clubs on the Island.