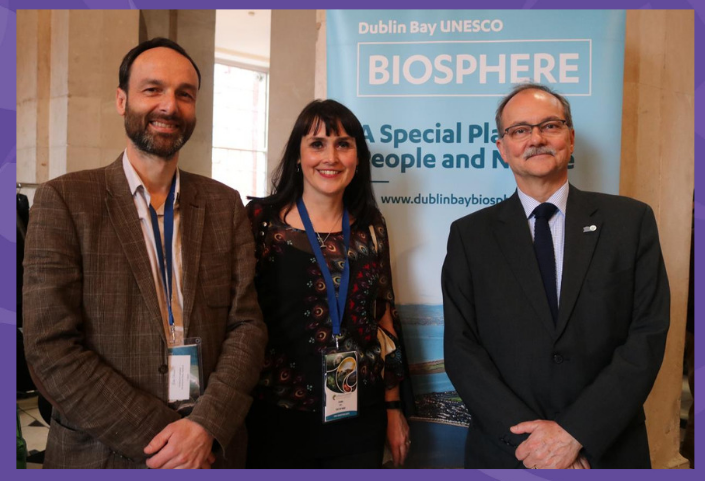 The Isle of Man played a significant role in a UNESCO Man and the Biosphere Programme (MAB) EuroMAB conference in Dublin last week.

EuroMAB (1st to 5th April) was attended by 300 delegates from 30 countries in Europe and North America.

The only entire nation member of the UNESCO programme, the Isle of Man Biosphere appeared on stage, on a panel, to showcase its work and, jointly with other Biospheres, delivered four workshops.

A film about a collaboration between winery Foraging Vintners and farmer Will Qualtrough, supporting United Nations Sustainable Development Goal 12 on responsible food and drink production, was screened on the opening day of the event.

The film demonstrated the Isle of Man Government’s support for local food and drink producers and encouragement for sustainable production, which is at the heart of the Biosphere programme’s ethos.

It was one of just 10 films selected to be screened from 70 contributed to the event.

Dr Richard Selman, acting Ecosystem Policy Manager at the Department of Environment, Food and Agriculture (DEFA), appeared on stage to speak about the collaboration and about UNESCO Biosphere Isle of Man.

Dr Maddrell was asked to step in at short notice and help lead a workshop on arts and culture, too.

‘EuroMAB is important to us as a Biosphere and provides us with the platform to discuss sustainable solutions amongst other jurisdictions. With this year’s event held in Dublin, it was a fantastic opportunity for us to join and highlight the work we’re doing to inspire our local community and further afield too.’

Dr Selman said: ‘Our Biosphere faces the same challenges as others as we connect people with nature and encourage everyone to share in a more sustainable future.

‘It was beneficial to meet dedicated Biosphere officers from across Europe and North America and to exchange experiences and ideas.

‘It was valuable to highlight the work the Isle of Man has done, in collaboration with stakeholders, to protect our marine environment, with the creation of nine new marine nature reserves.

‘Marine plastic pollution remains high on the global agenda. The Isle of Man is joining in an initiative commenced by the World Network of Island and Coastal Biosphere Reserves to combat this problem and this was featured at EuroMAB.

‘Bill Dale engaged everyone with the story of how Beach Buddies has grown locally and is influencing communities across the world.

‘It was a positive meeting, we met many useful contacts and came back with ideas that can be transposed to the Manx situation to help us work towards a more sustainable future.’