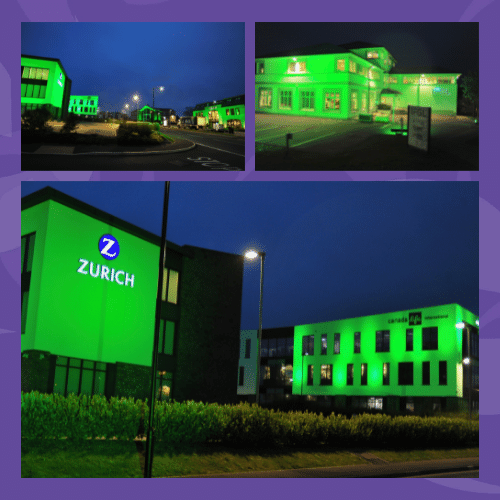 A spectacular show of support has come from some of the Island’s leading businesses to mark the start of Mental Health Awareness Week (May 10th to 16th).

Several buildings at Isle of Man Business Park were illuminated with green lighting on Monday evening (May 10th) thanks to an initiative organised by Zurich International. In addition to Zurich House (Zurich International’s HQ), the offices of Canada Life, Manx Telecom, International Financial Group Limited, Manx Utilities, the Cycle 360 building, and Jacksons’ showroom were all lit up with lighting provided by event specialists ELS.

Nigel Simpson, Head of International Markets, Zurich International, commented: “We are really grateful to have been able to take part in this initiative with our neighbouring businesses, and particular thanks to ELS for creating a spectacular light show which symbolised the strength of support for mental health and wellbeing amongst the Island’s business community. Isle Listen is now six months into a three year collaboration with the Z Zurich Foundation and Zurich International which is helping to support them in providing wellbeing education, prevention and transformative early intervention programmes.”

Isle Listen is encouraging people to show their support for the charity and Mental Health Awareness Week on Friday May 14th by wearing something green, the internationally recognised colour used to symbolise and raise awareness of mental health.

For more information find Isle Listen on Facebook, or go to www.islelisten.im