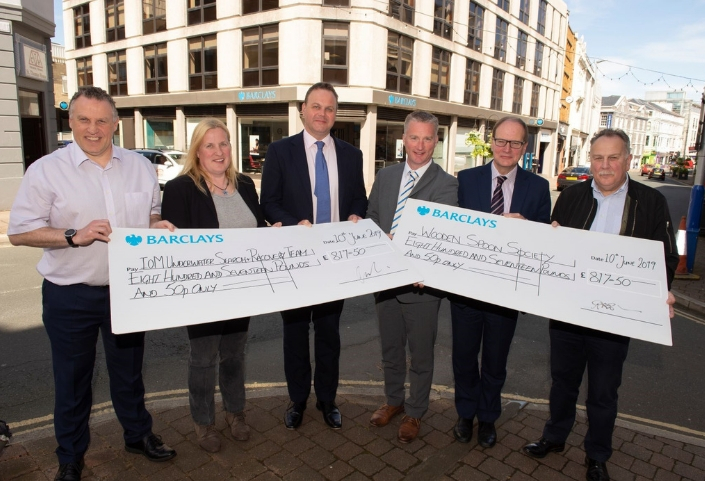 Two local charities have benefited from the generosity of the Island’s banking industry and their clients.

The proceeds were generously matched Pound for Pound by Barclays Bank so a total of £1,635 was raised to be divided between the two causes.
The Isle of Man Bankers Association is the trade association of all licensed banking institutions in the Island with membership drawn from a spectrum of banks.

LIBF acts as the training and professional development arm for the local banking community, as well as wider finance sector colleagues and has been successful in introducing some of its qualifications into local schools.

The Wooden Spoon aims to positively transform the lives of children and young people with disability or facing disadvantage in their lives. Every £1 raised locally is spent on life-changing projects in the Isle of Man.

To date, Wooden Spoon in the Isle of Man has provided funding for projects such as the Isle of Man Wheelchair Sports Club, Riding for the Disabled, Bridge the Gap pod and Project 21.

Chris, who is CEO of Standard Bank, explained:

‘Given my connection to rugby as both a player, coach, and latterly as a referee, it is great to support a charity which raises funds for causes based on the power of the rugby community.’

The Isle of Man Underwater Search and Recovery team is a charity whose volunteers can search, locate and recover anything or anyone that has been lost under the sea. Established in 2016, the search team provides specialist support to enable safe underwater searches of lakes, rivers, quarries, ponds and the sea.

Using underwater communications, the divers can talk to each other to coordinate their activity, and the supervisor on the surface can keep in touch with what the divers are seeing and doing.