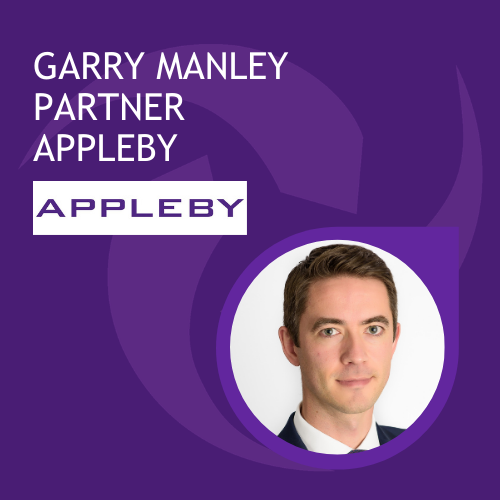 The Citywealth Future Leaders Awards highlight leaders under 40 in the wealth sector who excel at work and also make an important contribution to society.

Garry is the only Isle of Man lawyer to have been shortlisted for this year’s Future Leaders Awards.

Faye Moffett, Managing Partner for Appleby Isle of Man, said: “I am delighted to see Garry shortlisted for such a significant award. As well as being an excellent lawyer Garry demonstrates how being an effective leader is equally as important. His involvement in all aspects of client work, people development and local community projects inspires and motivates all who work with him. He is an asset to both the firm and the Island.”

Before joining Appleby, Garry practised for almost a decade in the London, Hong Kong and New York offices of Cleary Gottlieb Steen & Hamilton LLP.  Legal 500 UK describes him as “an outstanding corporate lawyer” who “knows how to get a deal done”.

Since returning to the Isle of Man in 2017, Garry has led the Appleby team on a number of significant transactions, including SBTech’s $3.3 billion merger with DraftKings, STX Entertainment’s merger-of-equals with Eros International, RL360’s £259 million acquisition of a 76% interest in Friends Provident International and the £256 million take-private of Manx Telecom.

Before studying at Oxford University, where he obtained a first class law degree, Garry was educated in the Isle of Man, and he has returned to his secondary school on several occasions to speak to sixth form students on applying to universities.  He is heavily involved in various local community projects, including the Appleby Academy, a 12-week programme that Appleby runs every year, where upper-sixth students work alongside a mentor to produce a report based on a real-life business scenario.  Garry also takes an active role in training and mentoring Appleby’s junior lawyers.

If you would like to support Garry’s nomination at the Citywealth Future Leaders Awards please register your vote before 15 October 2020: https://www.leaderslist.co.uk/leaderslist/garry-manley