Michael Crowe: 3 tips on moving from the private sector to the public sector 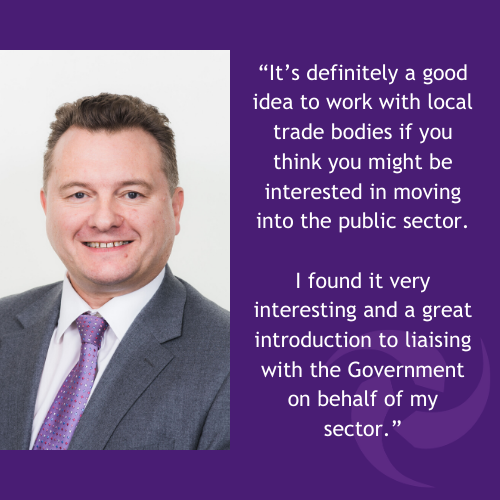 There are lots of exciting opportunities for trained accountants within the public sector. According to Finance Isle of Man chief executive Michael Crowe, getting involved with local trade bodies is the best way to find out if working in the public sector is for you.

A qualified chartered accountant since 1994, Michael Crowe joined the newly set up Executive Agency of the Department for Enterprise – a public-private sector partnership designed to promote and develop the island’s financial services sector – last year.

“I then joined PKF Isle of Man where I was an audit partner, before moving on to be a director at Grant Thornton about five years ago.” He believes working as an auditor was good training for his current role.

However, it is the time he has spent working with local trade bodies that he thinks best prepared him to take on the responsibility of representing the financial services sector on the Isle of Man.“ I was quite heavily involved in the local Chamber of Commerce for some time, both on the board and as a former President,” Crowe said.

“So when I was offered the chance to work on this new Government Agency, I knew I would find it a very interesting opportunity. “That’s why I would advise anyone looking to move into the public sector to get involved in their local trade bodies.

“It’s a natural way to move towards working for the Government and is a good way to see if this sort of role would suit you. “It’s also a great way to meet people and bring about positive change for your sector.”

A varied and interesting role

Finance Isle of Man’s mission is to “promote and develop the Isle of Man’s significant financial and professional services industry and ensure its recognition as an international business centre of excellence”.

For Crowe and his team, this means having a foot in two camps: the financial services sector and the Government.

“I regularly meet with business leaders and other Government departments, as well as representatives of local trade bodies,” Crowe said.

“Finance Isle of Man is also involved in event planning and looking at different ways to promote the Isle of Man around the world.”

“The job involves some travel: I was recently in London and will be visiting Hong Kong next year, but I don’t have to be away too much. “It also involves resource management and looking at policy, so it’s very varied and gives me a really interesting perspective on the local economy.”

Ensure you have an internationally recognised qualification

“It’s very important to pass qualifications that are recognised internationally, for example via AAT.

“In the future, you may want to work somewhere other than the UK; you might even be tempted by the great opportunities and work-life balance we have here on the Isle of Man.

Get involved with local trade bodies

“It’s definitely a good idea to work with local trade bodies if you think you might be interested in moving into the public sector.

“I found it very interesting and a great introduction to liaising with the Government on behalf of my sector.

Make sure you understand the role

‘Whenever someone is considering a change of direction in their career, it’s very important that they understand what will be required of them in their new role.

“If you are interested in doing the type of job I do, working with trade bodies is a natural way to gain a greater understanding of how the public sector works.”